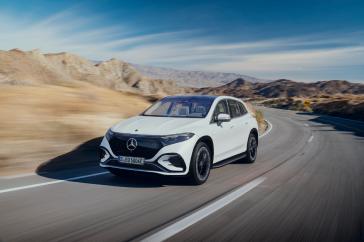 With the luxury sedan EQS and the sporty executive sedan EQE, Mercedes-Benz has entered a new, all- electric era in the upper market segments as well.


Interesting facts & figures
The new EQS SUV at a glance

Depending on the vehicle equipment and configuration, WLTP ranges of more than 600 kilometers1 (373 miles) are possible.

The torque sent to the wheels by the respective eATS (electric drive train) is checked 10,000 times per minute and adjusted if necessary. This enables a much faster response in the versions with 4MATIC than with mechanical all-wheel drive.

The electric motor on the rear axle has 2 windings with 3 phases each. This 6-phase design makes this permanently excited synchronous motor (PSM) particularly powerful. The peak output is 265 kW.

DIGITAL LIGHT (standard equipment) has a light module in each headlamp with three extremely bright LEDs whose light is refracted and directed with the help of 1.3 million micro-mirrors. The resolution is therefore more than 2.6 million pixels per vehicle.

Mercedes me Charge has an integrated charging network, with around 700,000 charging points, including more than 60,000 in the United States.

The large glass covering the MBUX Hyperscreen is curved in three dimensions in a molding process at temperatures of approx. 1202°F. This process allows a distortion-free view of the display unit across the entire width of the vehicle, irrespective of the radius of the glass cover.

A lithium-ion battery with 12 cell modules is installed in the EQS SUV. With this generation of batteries, a major step has been achieved in terms of the sustainability of the cell chemistry: the optimized active material consists of nickel, cobalt and manganese in a ratio of 8:1:1.

The optional driving sound of the EQS SUV is interactive and reacts to a good dozen different parameters such as the position of the accelerator pedal, speed or energy recovery.

No.6 MOOD mimosa is the name of the fragrance composed especially for the EQS SUV, It bears the number 6 because the first electric cars were added to the model range in 1906 in the form of the "Mercédès Electrique" vehicles. No.6 MOOD mimosa is an earthy fragrance with a touch of sensuality.

To get to the most important applications of MBUX, the user has to scroll through 0 menu levels. Hence the term zero layer.

Head-up displays are available in two sizes as an option. The head-up display with augmented reality content shows relevant information and actions three-dimensionally in the real driving situation and environment. Its display area has a diagonal of 77 inches. A virtual color image seems to float in the field of vision at a distance of about 33 feet.

The HEPA (High-Efficiency Particulate Air) filter as part of the optional ENERGIZING AIR CONTROL Plus, with a volume of 9.82 cubic decimeters, cleans the incoming outside air at its very high filtration level. Up to 99.75 percent of particles are separated out. Around 600 grams of activated charcoal are used to neutralize odors. The adsorption area is equivalent to about 150 football fields.

For haptic feedback during operation, a total of 12 actuators are located under the touchscreen surfaces of the MBUX Hyperscreen. If a finger touches certain spots there, they trigger a tangible vibration in the cover plate.

1 Coating of the cover glass simplifies cleaning of the MBUX Hyperscreen. The curved glass itself consists of particularly scratch-resistant aluminum silicate.

8 CPU cores, 24 GB RAM and 46.4 GB per second RAM memory bandwidth are some of the MBUX technical data.

The brightness of the MBUX Hyperscreen is adjusted to the ambient conditions using the measurement data from 1 multifunction camera plus 1 light sensor.

With up to 7 profiles, the display area for the front passenger on the MBUX Hyperscreen can be individualized.

· Registered
Joined May 24, 2019
·
283 Posts
One area that Mercedes will really shine when it comes to tech, is the head-up display WITH augmented reality...

"Head-up displays are available in two sizes as an option. The head-up display with augmented reality content shows relevant information and actions three-dimensionally in the real driving situation and environment. Its display area has a diagonal of 77 inches. A virtual color image seems to float in the field of vision at a distance of about 33 feet."

Here's what we should be experiencing...

About this Article
0 likes
1 Reply
Written By: